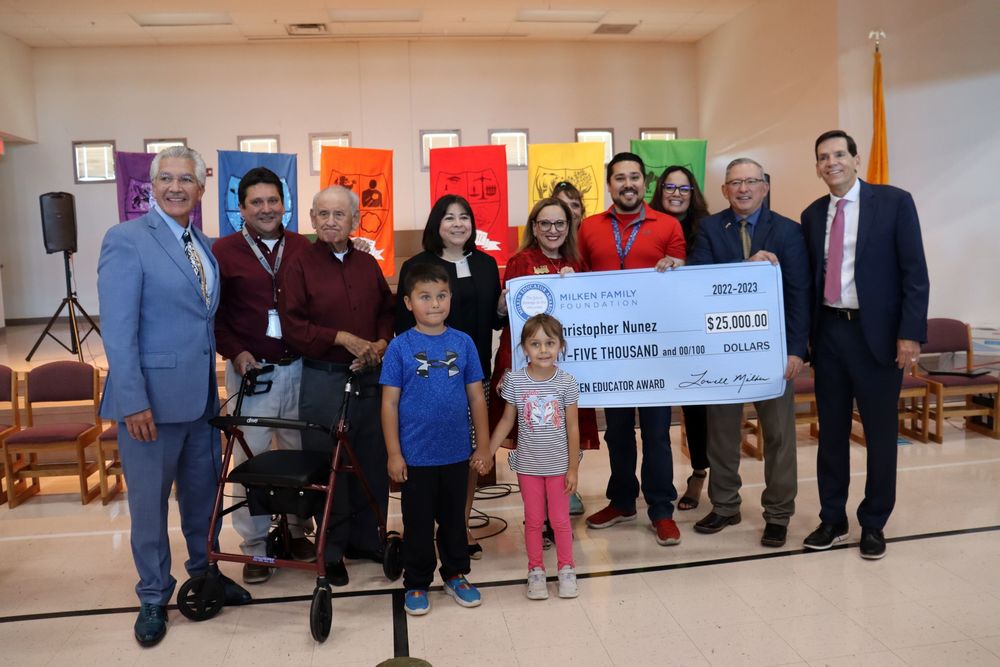 LAS CRUCES, N.M. — For Sonoma Elementary School fourth grade teacher Christopher Nunez, education has been a part of his life since he was a young boy. Both Nunez' parents teach in Las Cruces' public schools, and when he went to college, he followed their footsteps and studied elementary education. Today, this family legacy of education was honored as Nunez was surprised at a schoolwide assembly of cheering students, appreciative colleagues, local dignitaries and media with the $25,000 Milken Educator Award from the Milken Family Foundation.

The Awards will recognize up to 40 elementary educators in the 2022-23 school year. Over the past 35 years, more than $140 million in funding, including more than $73 million in individual Awards, has been devoted to the overall Milken Awards initiative, which includes powerful professional development opportunities throughout recipients’ careers.

"Teaching often becomes a family affair as children grow up in homes that elevate the profession, honor the hard work it takes to be a teacher, and celebrate the gift of teaching the next generation of leaders," said Dr. Jane Foley, senior vice president of the Milken Educator Awards and a 1994 Indiana Milken Educator. "Christopher Nunez saw this firsthand in his own family. Today, we honor him for his dedication to his profession and to his students. Congratulations, Christopher!"

Hailed as the "Oscars of Teaching," Milken Educator Awards inspire and uplift with the unique stories of educators making a profound difference for students, colleagues and communities. The specific states and schools on this year's winners' list remain a closely guarded secret until each Award is announced.

"Christopher Nunez exemplifies what it means to be a teacher. He's gone above and beyond to ensure his fourth graders understand real-world applications of classroom material and become lifelong learners," said New Mexico Secretary of Education Dr. Kurt Steinhaus. "His efforts to amplify the social and academic skills of every child in his class are evident in the high performance of his students. Thank you for your hard work and leadership, Mr. Nunez. You are a role model for everyone in education."

Research-Based Math Comes Alive in Classroom: In Nunez's New Mexico classroom, students build problem-solving skills through engaging hands-on activities. Nunez's fourth graders use measuring tapes and cubic tiles to design gardens and pools for their backyards during lessons on area and perimeter. When Sonoma adopted its 1:1 technology initiative, Nunez led the school's efforts to demonstrate to the state that the iPads were being used effectively in instruction, guiding students as they used iMovie to create videos on curriculum-linked topics in social studies, science and literature. Children lead class discussions and demonstrate their strategies to accomplish each lesson's learning objective. Nunez uses research-based strategies to enhance instruction for all students, especially English learners, and analyzes data to identify areas where more instruction is needed. 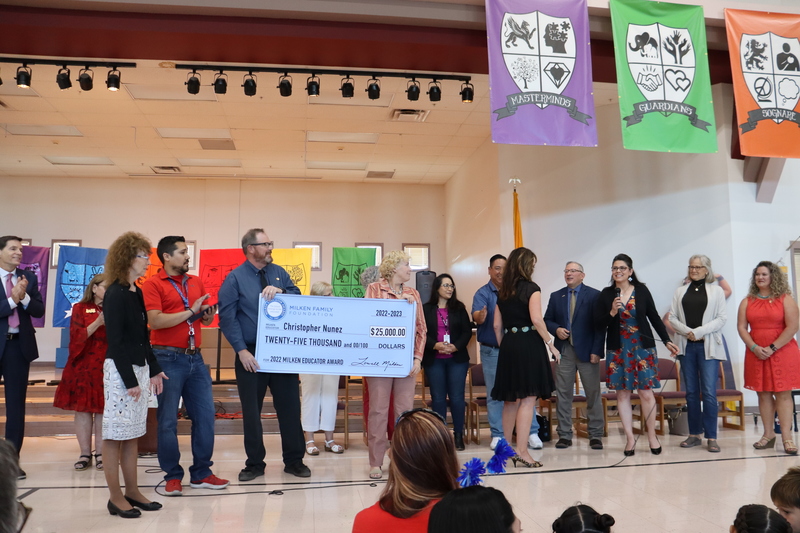 Creative Student Engagement Activities Encourage Learning: At the end of each day, Nunez has students answer exit ticket questions based on the day's learning targets and assess their own understanding of the concepts with green, yellow and red stickers. In the after-school programs he leads, students conduct interviews and write human interest stories for Sonoma's broadcast channel, such as profiling the then-new assistant principal. In "Reader's Theater," they read a play, rework the characters or ending, then act it out for their peers. Nunez's students excel, growing from 70% to 100% proficient on the iReady Math assessment and ending the year with 92% proficiency on the Star Reading test.

Visionary Leader Who Inspires Others: A member of Sonoma’s leadership team, Nunez championed the idea of dividing the school into six "houses" to strengthen connections among students in different grades. Each house has a focus—for example, Team Vision brainstorms new ideas and encourages collaboration, while Team Atlas centers on love and kindness. Nunez leads professional development in technology and math, and helps new staff members navigate classroom issues, content area questions and technology. He has shepherded the adoption of new textbooks as Sonoma's social studies lead and works with colleagues on data analysis and backwards planning. Nunez participated in Harvard University's Partnership for Enhancing Mathematics, recording his lessons and working with coaches to refine his teaching practice. During the pandemic, Nunez went above and beyond to make sure learning was accessible for all, providing extra Zoom help for ELA and math intervention groups and creating highly interactive lessons using breakout rooms, annotation, Jamboard, Nearpod and Canvas.

Nunez understands students' social-emotional needs and fosters an environment of respect and trust. He is a leader in implementing Sonoma's restorative practices, working with students to talk about and find resolutions to conflicts. Student-driven and committed to the community, Nunez hails from a family of educators—both parents teach in Las Cruces Public Schools.

More About the Milken Educator Awards: "The future belongs to the educated." Along with the financial prize, recipients join the national Milken Educator Network, a group of more than 2,900 top teachers, principals and specialists. The network serves as a rich resource for fellow educators, legislators, school boards and others dedicated to excellence in education.

The $25,000 cash Award is unrestricted. Recipients have used the money in diverse ways. For instance, some have spent the funds on their children's or their own continuing education, financing dream field trips, establishing scholarships, and even adopting children. 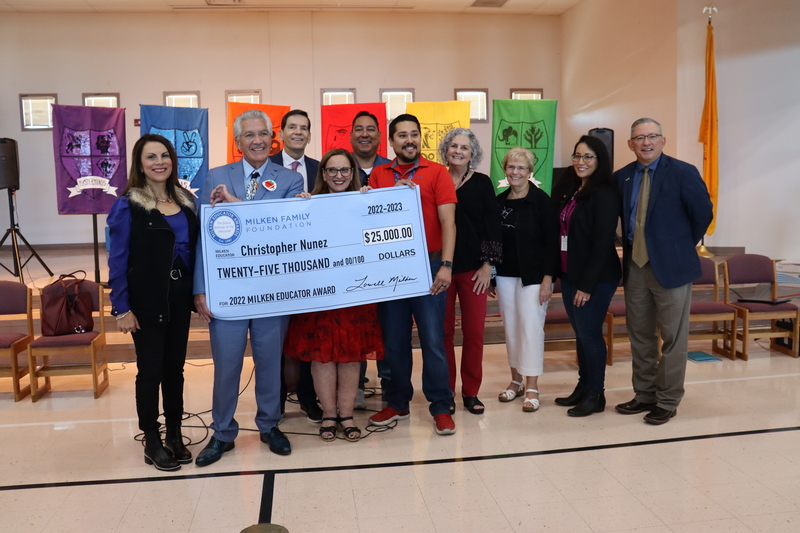 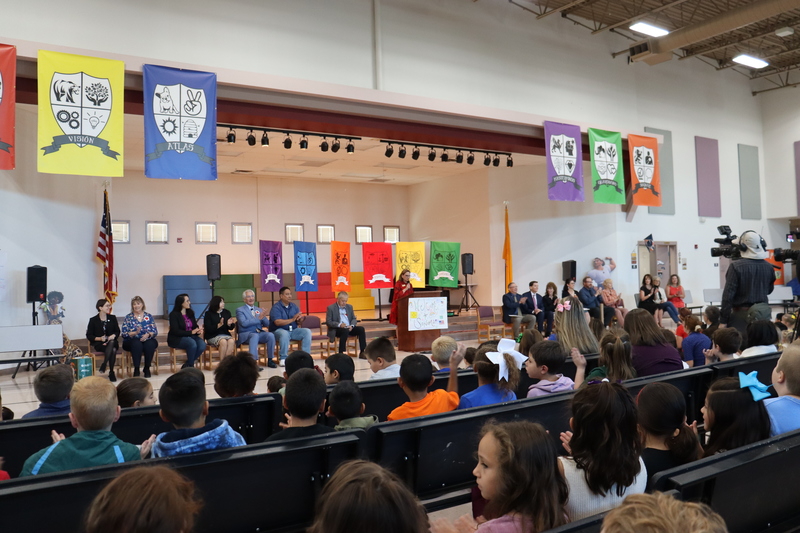 For more information, visit MilkenEducatorAwards.org or call the Milken Family Foundation at (310) 570-4772. 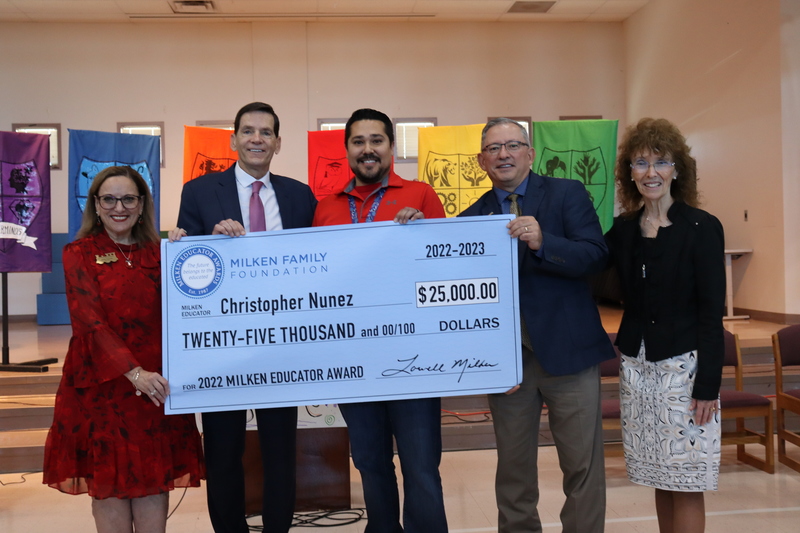 About the Milken Educator Awards The first Milken Educator Awards were presented by the Milken Family Foundation in 1987. The Awards provide public recognition and individual financial rewards of $25,000 to elementary and secondary school teachers, principals and specialists from around the country who are furthering excellence in education. Recipients are heralded in early to mid-career for what they have achieved and for the promise of what they will accomplish. The initiative was created by the Milken Family Foundation, which celebrates 40 years of elevating education in America and around the world. Learn more at MFF.org